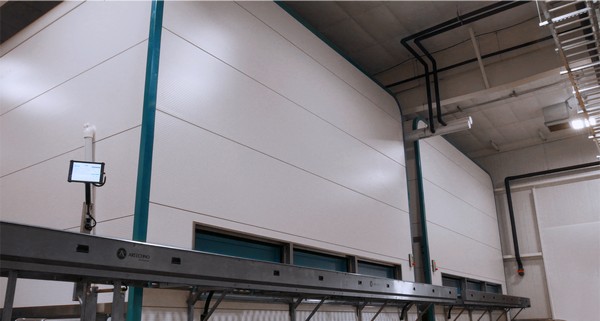 Artechno is currently building a plantation plant like this one for Canadian lettuce growers. Standard planting plant. The latter is important, as this is probably not the last farm expansion. “Without having to stop production, we can connect additional CSC + AVFs in the future and produce double or triple, all in the same automation”, explains Maxim van Zeijl of the De Lier company.

room
A Canadian farmer knocked on De Lier’s door when it turned out that the demand for locally grown lettuce in the region was increasing exponentially and it was difficult to keep up with the supply. Additional production capacity was needed to meet this growing demand. There was also a desire to organize the cultivation process more efficiently.

The farmer already has space and the building has space for 3 automated climate cells + integrated climate cells, each of 768 square meters distributed in 8 layers. In total, the farmer has 2,300 square meters of fully mechanized cultivation area, from sowing to harvest. Maxim knows that this can be extended later. “AVF + Compact consists of a series of models and sizes which together effortlessly create a fully automated AVF + factory of over 20,000 square meters.

Four types
On the additional vertical farm that will go into production in January 2022, the farmer wants to plant four types of lettuce. These are red and green oak leaf lettuce and two types of Salanova lettuce. “We have already done extensive research on all varieties in our research center and have a lot of experience with it,” says Maxim. “That’s part of why they came to see us.

Opkweek in vases
To make the best use of the available space, the farmer will work with two stages of cultivation. At the first stage of selection, the young plants are at very high density in order to make the most of the growing area, climate and light available. The plants are then spaced out and transferred to another layer of the vertical farm for the second stage of growth. “After the second selection step, the plants are automatically moved to the final distance. In this case 48 heads per square meter, but it varies according to the crops ”, Maxim already knows. After the breeding stage, the plants go to the finishing stage for a number of days and then are moved from the vertical farm directly into the harvester. Turns into.”

Constantly by the harvest
Just like multi-step reproduction on separate layers, something clever was also invented here at De Lier. “The harvester cuts the heads and is transported via conveyor belts to a transport crate. When the crates are full, we weigh them in a special way, so there is minimum downtime between the crates and the farmer can continue to harvest almost continuously.

Even when moving from one genre to another. The harvester uses software to know what type of crop is being cut. Based on this, the machine itself can adjust the height of the cutting blade and the production speed. “

start
As for the culture itself, the agronomist Rick van Schie of Artechno has already developed the starting recipe for the farmer. This means, among other things, that the climate and lighting have been changed in a way that works well for all species. In this case too, four types get along well. An indication of the expected return has also already been given. Initially, in the first stage, about 75 tons of lettuce per year, after which it will be extended in the second stage to a production of 222 tons (or even more, the farmer thinks about it).

Maxim: “During the first weeks of January, we also offer bi-weekly start-up support and guide you on how to optimally develop yourself with our system. But if we do everything now, it doesn’t matter anymore. After all, it is a largely standardized customization, but of course it is individually pre-adjusted according to the wishes of the farmer. As a result, the quality is high, but the cost to the customer is kept as low as possible. It is also easier for farmers to develop in the long term with this modular system ”.