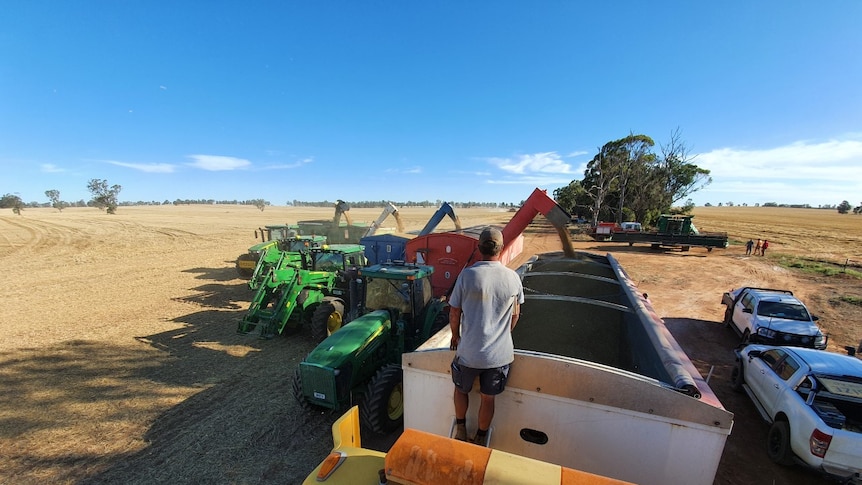 A devastated community in southern Riverina, NSW, has mobilized to bring home the harvest of Broughton Bird – who tragically died in a logging accident near Daysdale last week.

To help finish his harvest, farmers from Mr. Bird’s community arrived with 15 pickers, over 20 trucks and 10 hunting bins to strip his barley crop.

They harvested around 3,000 tonnes of barley from 500 hectares in a single day, with 60 people stepping up to get the job done.

Daysdale farmer Peter Hanrahan organized the team after overtaking Mr Bird’s barley crop and realizing it needed to be skinned before the rain fell.

â€œI walk past the barley crop almost every day and was worried that if it rained again it would lose quality and yield,â€ Hanrahan said.

â€œWe thought we could help the Bird family during this time as they have a lot of acres to harvest,â€ Mr. Hanrahan said.

Broughton Bird, 66, was a large landowner in Daysdale, Coreen and Rennie districts and was one of the first to embrace no-till farming and major on-farm grain storage.

â€œHe was a very good farmer. He opted for no-till farming exceptionally and he went all out,â€ Hanrahan said.

â€œBroughton was highly regarded in the community as a good farmer and a good guy. “

The high esteem in which Mr Bird was held was reflected in the number of people who showed up on harvest day to show their support for his grieving family.

â€œOnce word got out about it, I didn’t have to do anything because people just called and offered to help,â€ Hanrahan said.

Get the latest rural news

“There were people who didn’t even know him and who offered to help,” he said,

“A lady from Wodonga brought tea for everyone at her expense – and she didn’t know the Bird family.”

Mr Hanrahan said members of the CDHBU football club were preparing lunches for everyone, and trucking companies had also sent trucks to help on the same day.

The goal of stripping the Birds’ barley crop in one day was to ensure that farmers did not have too much time away from their own farms during the busy grain harvest. However, no one was rushing.

â€œKnowing that Broughton was an agriculture perfectionist, we wanted to get the job done right, and not speed up and rip on it. Everyone knew what he liked,â€ Hanrahan said.

“I think we did it the best we could. Everyone just did what they had to do and it worked out well.”

Mr Hanrahan said Mr Bird was a trendsetter and had set up a large on-farm grain storage complex at his farm in Rennie, which was of great help when he there were 15 pickers to strip.

â€œThere aren’t many farms that would be able to process 2,500 tonnes of grain on their own farm in a day,â€ he said.

â€œBut that’s how Broughton was. He was a trailblazer, and I always thought he was 10 years ahead of how he grew and where he was set up.

“He was a hard worker and he is honored for what he has accomplished.”

Mr Hanrahan said Mr Bird’s sons helped that day by weighing the trucks and sampling the grain at the grain complex.

â€œThe family is happy with what we’ve done and it’s a big load on their shoulders.

“We have tried to stay away from the family and give them some peace and we hope this has helped them get back on track and speed up their harvest.”